(2) The State of VERMONT does not issue weapon/firearms licenses. Florida licensees – indeed, licensed or unlicensed citizens from any state – may carry in Vermont. This presents a problem for reciprocity with Florida. Florida law provides that an out-of-state resident must have in his or her immediate possession a valid license to carry a concealed weapon or firearm. Since Vermont residents have no such license, the right to concealed carry cannot be extended to them under Florida law.

(4) These states will honor the Florida concealed weapon license ONLY IF the licensee is a resident of the State of Florida.

(5) The Attorney General’s Office of the State of ALABAMA has indicated that Alabama will honor BOTH resident and non-resident Florida licenses. However, the Alabama Attorney General notes that there is some uncertainty as to the limits of Alabama’s reciprocity law as it pertains to non-resident licenses. Pending clarification by the Alabama Legislature or a decision by an Alabama court, he urges non-resident Florida license holders to exercise caution. Refer to the Alabama AG’s Web page for the latest information.

(6) These states issue concealed carry licenses to qualified individuals who are non-residents. These non-resident permits cannot be honored under Florida’s reciprocity provision. 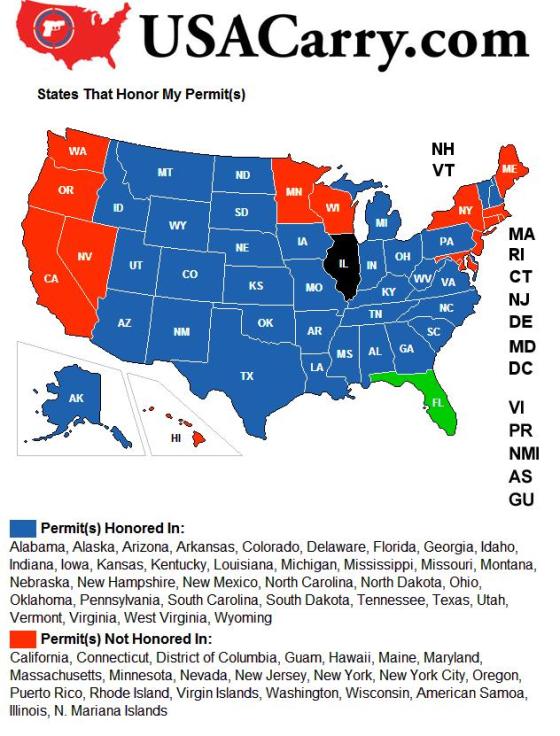 Posted by vernonjonesjr on May 16, 2013 in Uncategorized.

This site uses Akismet to reduce spam. Learn how your comment data is processed.